About a month ago, we finally got the chance to give Atomic Robo – The Roleplaying Game a whirl.

Character Generation
To help with character generation, I put together a set of worksheets with examples. You can check them out here: ARRPGchargenWorksheet

What we ended up with was:

Bongo (Experiment P37) – Sapient Circus Bear (Weird Character Creation method – Beast mode. Okay, brief backstory here: Bongo was a circus bear that had enough of riding bicycles and lashed out at the crowd, killing a few of them. Rather than put the bear down, they (who?) tried some behavior control experiments via gene-splicing. Going too far, they ended up with a sapient bear who now works for Tesladyne.)

First Play Session
Since Josh (Katsumi’s player) had a stated interest in Science Team Super Five, it was easy to make the jump to say that Big Science, Inc. called Tesladyne asking for help. I looked at him and asked, “why is that Josh?”

Josh responded that Science Team Super 5 was tasked with checking out a disturbance on a nearby island that has an abandoned outpost from World War II. Unfortunately, the whole team has gone missing, so Tesladyne was called in to help find them…

As the Teslajet sets down on Big Science, Inc.’s airstrip, the first thing Rust asks for is to borrow one of their drones. (Mistake #1 – The GM should have added a Fate point to the reserve for providing special equipment to the PCs.) She gets it up in the air and to the island with ease. From the air, she can see the wreck of Science Team Super Five’s boat near the mouth of a cave inlet. On the island, she can make out the remains of a hangar that opens onto a large airfield that has been completely overgrown with trees. Rustling through the trees, she sees some movement and puts the drone into a dive for a closer look.

Just as she gets close enough to make out what appears to be a walking tank, it fires on the drone. The machine is no match for Rust’s battle bot skills — she dodges the incoming rounds with ease and retaliates with missiles! Unfortunately, the multi-inch thick steel has no problem shrugging off the blow. Rather than risk losing the drone in the one-sided battle, Rust returns it to base.

At this point, the group is convinced the walking tank is invulnerable. Perfect time to try out the Brainstorming rules!

Step 1: Begin the Brainstorm
Question posed: “How do we defeat that walking tank?”
Step 2: First Fact
Bongo rolls high with Physics, 1 success. Considering the mechanics involved with a walking tank, he states, “Thinner armor in the rear.”
Step 3: Second Fact
Rust rolls high with Engineering, 1 success. Noting that nobody has been on the island for years, she states, “It’s remote controlled.”
Step 4: Third Fact
Katsumi, allowed to use the free invokes on the previous facts, rolls high with Chemistry, and succeeds. Since the metal monstrosity has been on a Pacific island for centuries, he states, “Corroded.”
Step 5: Hypothesis
Katsumi hypothesizes, “The easiest way to get to the control circuitry is through the thinner corroded rear armor. In other words, stab it in the butt.”

With this information in mind, they take a boat out to the island. Smartly deciding not to take the same route Science Team Super Five did, they find a nice sandy chunk of beach to quietly coast into and disembark; Bongo taking the boat’s machine gun with him. (No, seriously, imagine a big brown bear, wearing khakis, a white short-sleeved shirt and a tie, and carrying an M-60!) Discretion being the better part of valor, Rust and Bongo start sneaking up to the hangar. Ignoring that valor nonsense, Katsumi makes a beeline towards the walking tank. 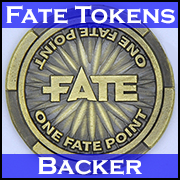 Upon arriving, Katsumi sees that it is indeed a Laufpanzer and tries to make an entrance with a hastily concocted smoke bomb using his portable chemistry set. Since “stab it in the butt” was established, it became important to know which way the Laufpanzer was facing. Looking at the table for a random direction generator, I noticed that the Fate Coins we were using (also for the first time!) had nice big arrows on them! Check out the A in the embossed Fate logo at the right. After a quick coin spin, unfortunately for Katsumi, it was pointing directly at him. The dance begins! Sword flashing. Machine guns fire. Both sides ducking in and out of the smoke.

With the sound of gunfire, Bongo decides to go help Katsumi. Rust sticks with the plan (she’s stubborn that way) and makes it to the hangar. She steps over the fallen and dilapidated hangar doors into the dark maw. Just as her eyes start to adjust to the darkness, three sets of red lights blink to life – each set attached to another Laufpanzer.

Back in the tarmac forest, Bongo’s arrival is just the added distraction Katsumi needs to get position on the metal monster. Two quick stabs with his katana and the beast powers down. (Mistake #2 – Some bad guys cost Fate points from the scene’s allotment.)

Rust makes out a human-sized doorway behind the three warmachines and bolts for it, just as they open up with their machine guns. She clears the doorway and through the observation bay as bullets shred the glass and furnishings. Bongo decides Katsumi’s got the tarmac under control and sprints towards the gunfire at the hangar.

Katsumi pops the rear hatch of the Laufpanzer and finds Guardian Blue inside! His Science Team Super Five helmet has been removed and replaced with some sort of neurohelmet that connects directly to the tank, but Katsumi can’t figure out how to disconnect it without frying the Guardian’s mind.

Bongo arrives just in time to draw the attention of the three walking tanks in the hangar. A protracted battle plays out between them.

Meanwhile, Rust is following fresh footprints in the ancient dust when Katsumi calls her over Facetime/Skype/TeslaTV and shows her the mess of wires. With her input, Katsumi removes the wires from the tank first, then removes the neurohelmet from Guardian Blue, saving him.

After some cleverly aimed shots and lots and lots of ammo, Bongo is able to disable one of the Laufpanzers. (Mistake #3 – Don’t forget to take into account Armor:2 rating!)

Rust follows the footprints all the way down to some sort of control room. There are several banks of clunky controls, eight or nine ancient monitors, eight vestibules, four of which are empty, four with neurohelmets dangling, and (What the heck! Why not?) a Helsingard Warbot at the controls! Rust fires the first shot with a snarky comment about how far behind all his technology is. He returns fire with a giant robotic fist.

With Bongo holding their attention, Katsumi is able to run past the two functioning tanks and join Rust. The two of them spend a few cycles discovering swords and pistols have no effect on Helsingard’s chassis. They also discover being pummeled by a warbot hurts. Rust resorts to belittling Helsingard’s lack of progress in the field of robotics.

Bongo is able to cripple another Laufpanzer and Helsingard Warbot brain #6 explodes after a string of extra-harsh insults. (Mistake #4 – Don’t forget to give Helsingard Warbots their extra three stunts!)

Rust is able to shutdown the the remaining Laufpanzers, the team extracts the remaining members of Science Team Super Five, and brings their semi-conscious bodies back to Big Science, Inc. At which point, there is some awkward conversation between Dr. Junji Yumeno and Katsumi as neither of them look at each other.

Somewhere in a secret underground base, Helsingard brain #7 is being loaded into the next Warbot frame…

Afterward
Josh and I decided that this was to be Katsumi’s “origin story”. It turns out he was the only survivor of Super Team Science Five’s mission to the island, he doesn’t remember a thing of what happened, and he was disgraced enough to leave the team and join Tesladyne.